Only a few days before Christmas I received an email, the reading of which inspired me to let out a spontaneous scream of delight that alerted even my busy remote-working family. The environmental permit practices of northeastern Estonia were changing! This decision will reduce the discharges that pollute the Gulf of Finland in a very tangible manner – hence my scream of delight.

This Christmas gift to the Gulf of Finland has required unrelenting, gutsy, and should I say terrier-like effort.  It was two years ago, working for our EU project, when the horrendous situation of industrial discharges in eastern Estonia were brought to our attention. The objective of the BEST project (Better Efficiency for Industrial Sewage Treatment) was to improve the treatment of industrial wastewaters that are taken to municipal treatment plants. The Foundation initiated the project in frustration, as it appeared that the ten years of major effort we had put into curbing discharges at municipal wastewater treatment plants all around the catchment area – e.g. in Russia, the Baltic countries, and Poland – would be worth nothing, as all over the place industrial discharges here and spurts of slime there were messing up the extremely fine-tuned processes in the treatment plants. It was an issue we had to tackle, and so we did, launching a project in cooperation with the City of Helsinki and many other organisations to remedy the situation.

In November 2018, we held a BEST project meeting in Toila, northeastern Estonia. Toila’s location by the coast of the Baltic Sea is idyllic, but, going inland, this idyll becomes something altogether different.  Ever since the Soviet era, heavy, polluting industries have been located in northeastern Estonia, where oil shale, or rock containing kerogen, can be found. When the oil shale is burned, enormous amounts of ash are created, and huge black mountains of ash are in fact typical to the landscape in northeastern Estonia. When we toured the area in connection with our project meeting, we saw not only ash mountains but many plants of heavy and chemical industries – and the place where they dispose of their wastewaters, i.e. the municipal treatment plant of Lake Kohtla.

When we asked plant director Andra about this, it turned out that environmental permits in northeastern Estonia, required by the EU for industries, do not set any limit values when the wastewaters are disposed of at municipal treatment plants. This practice goes against both the EU Industrial Emissions Directive and the Urban Waste Water Directive, but as northeastern Estonia is one of Estonia’s more socially vulnerable areas, they had made the decision to uphold the vitality of the industry, no matter what the price. In this case, regional policies were implemented at the expense of destroying the Baltic Sea.

Shocked by our discovery, we tried to bring attention to the discharges via many routes and stakeholders, but to no avail. We even spent a few sleepless nights pondering about what was going on in Lake Kohtla, until finally Anna, my very wise colleague with EU work experience, came up with a solution: we could file a complaint with the European Commission over the fact that the environmental permit practices of heavy industries in Estonia go against EU directives. Together with our always helpful pro bono lawyer Tuomas, we drafted our complaint to the EC in the spring of 2019.

A year later, in the spring of 2020, the EC responded with a request for concrete proof on the matter. Here, our Anna became a sleuth, digging up 23 environmental permits granted to industries from the Estonian environmental permit registry, and in 16 of these cases the discharges were disposed of at municipal treatment plants. None of them had limit values for discharges, proving our case once and for all.

Being a guard dog is not always a pleasure, but there are times when there is no other way to help the Baltic Sea. I believe that our complaint, together with the publicity the matter received in Finnish and Estonian media, finally brought the results that will improve the status of the Gulf of Finland. In the future the oil, solvents, and toxic heavy metals from industries will no longer end up in the Baltic Sea.

Our work goes on on the EU level, as all of the Baltic countries apparently have the same kind of environmental permit practice in place. We await with excitement what the Commission’s decision regarding this complaint, so crucially important for the Baltic Sea, will be. We have also requested that this infraction would be taken into account when the EU’s Industrial Emissions and Urban Waste Water directives are updated next year. Luckily, many Finnish MEPs have already promised to help us in this matter – many thanks for this!

In Baltic Sea protection, you wade in the swamps of directives, national legislation, the actions of authorities, and non-transparent decisions – at times, it can be an endurance battle. Things can seem fine in reports and official documents, while reality is in a state of total neglect. EU projects delving into structural issues that at times feel like a far cry from tangible protection work can be the ones that lay the golden egg, as breaches that were left in the shadows are suddenly brought to daylight. At such times, we have the opportunity to make talk become reality. In the best scenario, the tenacity of the terrier is rewarded with a tangible Christmas present, as happened now in northeastern Estonia.

Marjukka joined the Foundation in 2005, when the Foundation launched its first Baltic Sea project improving the efficiency of wastewater treatment in St. Petersburg. As our operations have expanded, Marjukka, who speaks fluent Russian, has travelled all around the catchment area of the Baltic Sea, hunting for cost-efficient projects. Since then, the Foundation has implemented 30 Baltic Sea projects, and the team implementing the projects has grown from one Marjukka to a team of seven.

The Foundation’s oldest employee, in terms of career years, Marjukka calls herself a veteran of the Foundation. She goes all in, with passion and integrity, combining the strengths of a humanitarian and a terrier. The Foundation’s informal motto “Nothing is impossible” was born out of real-life situations, where complex and difficult projects were made possible and eventually successful.

In her free time, Marjukka seeks the open air at the sea shore or in the fells, where she will whenever possible sleep outdoors, with only the roof of the tent between her dreams and the starry sky. 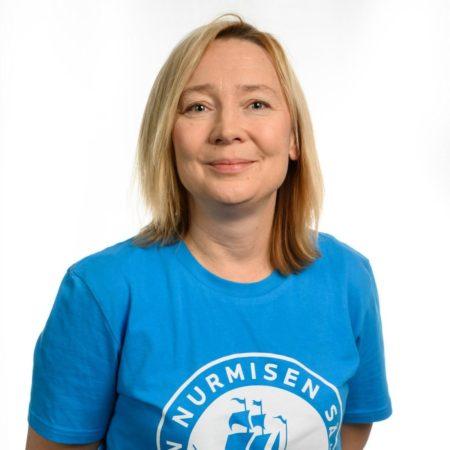 BEST Project
BEST Project
The project improved the efficiency of industrial wastewater treatment at municipal treatment plants by improving the cooperation and knowhow shared by industry, the treatment plants, and the authorities.
Read more
Your current shadow instance is ""Staging"". Exit