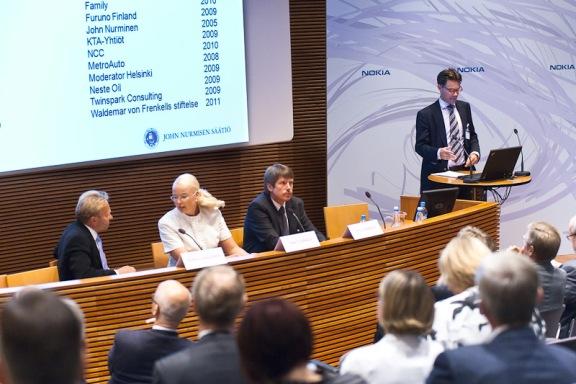 Public and private sector co-operation is a must

In his opening speech Esko Aho, Executive Vice President, Corporate Relations and Responsibility at Nokia and host of the event, referred to Michael Porter’s views on corporate responsibility. Aho pointed out that from Nokia’s viewpoint, supporting the Clean Baltic Sea project is an excellent example of co-operation that generates shared value. Responsible business operations cannot be conducted without the support of the public sector, with legislation and procedures creating the operational prerequisites for the so-called third generation of corporate responsibility.

In his speech, Juha Nurminen, Chairman of the Board of the Foundation, thanked the Foundation’s supporters. The St. Petersburg project, which has received a great deal of attention, would not have been possible without the original ‘high-risk investors’, i.e. Nokia, Fortum and Sanoma. In the span of six years, the Foundation has evolved into a key environmental player, attracting various public and private supporters.

The Foundation now has 17 projects involving wastewater treatment plants in Northeastern Russia, Estonia, Latvia, Poland and Belarus. The first and most extensive of these was the co-operation project with the St. Petersburg water utility. The project was completed in June this year, and resulted in the annual phosphorus load of the Baltic Sea being reduced by 1,000 tonnes. As agreed with the St. Petersburg water utility after the celebrations in July, these results will be continuously monitored, explained Nurminen.

Veli Sundbäck, chair of the Foundation’s eutrophication project advisory team, stated that to comply with HELCOM requirements, the annual phosphorus load of the Baltic Sea must be reduced by a further 7,000 tonnes of phosphorus. After St. Petersburg, there are no other Baltic cities that could host an individual project of this scale, so the remaining tonnes must be accrued from several targets.

Thanks to its Finnish supporters, the Foundation has also been successful in initiating two large-scale, EU-funded joint projects. The PURE project has been active since 2010, and PRESTO was approved as a new project of the EU Baltic Sea Region Programme in June 2011.

The total combined budget of these EU-funded projects is €7.2 million, of which 3 million consists of direct investment to improved phosphorus removal in the Foundation’s target city wastewater treatment plants. Marjukka Porvari, Director of the Foundation’s eutrophication projects, gave more details on project activities.

Wastewater treatment plants in Belarus were built during the Soviet times, so, to a large extent, the infrastructure that is needed already exists. The latest nutrient removal technologies are, however, not known or utilised, so the starting point is very much the same as it was in St. Petersburg when the Foundation initiated its project there. Consequently, Belarus has an excellent opportunity to reduce phosphorus loads in a cost-efficient manner.

This is also the goal of PRESTO, an EU-funded joint project initiated last summer. Its purpose is to reduce the annual phosphorus loads to the Baltic Sea by at least 500 tonnes. The project’s duration is three years. The Union of the Baltic Cities (UBC) is in charge of PRESTO project administration. The Foundation steers all technical studies and investments. Berlin’s technology university, TU Berlin, is responsible for the training modules of the project.

Juha Nurminen called for amendments to EU’s current wastewater directive, which has been drawn up to match the tolerance levels of the Mediterranean and the Atlantic Ocean. Compared to these, the Baltic Sea is a shallow puddle, absolutely unable to tolerate similar nutrient loads. If, for example, the hundreds of Polish wastewater treatment plants would treat their wastewaters in line with HELCOM recommendations, Poland would be able to reduce the total load of the Baltic Sea by 2,500 tonnes of phosphorus annually.

Marjukka Porvari emphasised the importance of motivation in the conservation of the Baltic Sea. Political decision makers, cities and waterworks of the area should be motivated to operate in line with HELCOM recommendations. St. Petersburg, for example, committed voluntarily to treating its wastewater more efficiently than is required by the EU.

One way to promote commitment is to spread the word on the success stories and heroes of the Baltic area. Creating such a ‘green list’ was the idea of HELCOM’s Mikhail Durkin, who participated in the discussion. Durkin felt it was important to reinforce co-operation with Russia by introducing the country to the very core of Baltic Sea activities.

Juhani Tervala, Director General of the Finnish Transport Agency, led the discussion towards the second topic of the day, i.e. the safety of oil transportation in the Gulf of Finland. Every day, approximately 20 tankers sail the narrow routes of the Gulf. Statistically, Tervala pointed out, there should be approximately four oil spill accidents every year in Finnish territorial waters. In reality, we have seen only 1-2 accidents each year. The Finnish Transport Agency has a key role in the John Nurminen Foundation Tanker Safety project, which is also a flagship project for public-private partnership. The project has a very concrete target: to reduce the risk of major oil spill accidents with the introduction of a service created in the project. The goal is to have this service, i.e. ENSI navigation practices, deployed by all vessels sailing the Gulf of Finland.

The panel discussion led by the chairman of the Foundation’s Tanker Safety advisory team, Juhani Kaskeala, was joined by Pekka Laaksonen, Project Manager, Stig Sundberg, Master of the Neste Oil tanker MT Mastera, and Tiina Tuurnala, Director at the Finnish Transport Agency. In Tiina Tuurnala’s view, vessels that are familiar with the special characteristics of the Gulf of Finland do not constitute a risk. By contrast, when new oil companies and crews enter the Gulf of Finland because of growing traffic in the area, they are sailing seas and encountering snow and ice conditions they have no prior experience of. Stig Sundberg emphasised the fact that winter traffic is one of the greatest challenges to marine traffic safety.

Juhani Damski from the Finnish Meteorological Institute and Kai Valtari from Arctia Icebreaking joined the discussion as representatives of stakeholders who have donated effort and resources to the ENSI project. Juhani Damski explained that the Meteorological institute issues a weather-related warning approximately every three days. Kari Kosonen from Finnpilot Pilotage commented the service specifically from the point of view of pilotage, and stated that the service is a step in the right direction, which would, ideally, provide a vessel’s bridge with all relevant route data in one package. Now, the bridge must always take the initiative and search for information from various sources. Tönis Pärsim from the VTS centre of Tallinn said he thought highly of GOFREP, the reporting and monitoring system shared by Finland, Russia and Estonia, and expected the ENSI service to bring even more added value to the system.

Fundraising efforts continue as the Foundation works towards its targets

In his closing remarks Erik Båsk, Secretary General of the Foundation, thanked all the supporters without whom the Foundation’s operations would not be possible.

By the end of April this year, the Foundation had raised €7.1 million for Clean Baltic Sea project work. Fundraising began in 2005. Particularly in the past few years, the value of donated time and services has surpassed that of monetary donations.

Fundraising continues, enabling the Foundation to reach its targets. Set targets specify that the Baltic Sea’s annual phosphorus load should be reduced by 2,500 tonnes by 2015, and that tankers sailing the Gulf of Finland should deploy the ENSI service during 2013.