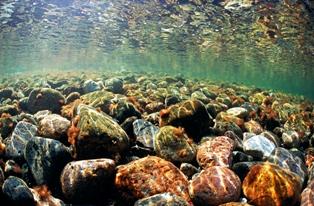 The Helsinki Music Centre is getting ready for the John Nurminen Foundation’s Clean Baltic Sea concert on 26 February. As a taster of things to come, Jukka Nurminen’s underwater photography exhibition is now on display at the Music Centre’s main lobby. The exhibition will be open until 17 March 2013.

On 26 February, maestro Valery Gergiev will perform at the Helsinki Music Centre for the very first time. The maestro will conduct the Helsinki Philharmonic Orchestra as a pro bono donation to the John Nurminen Foundation. The idea of cooperation between the Foundation and Valery Gergiev was engendered already three years ago. The maestro’s visit and donation stem from the belief that music and culture can be harnessed to the work of protecting the Baltic Sea. The music performed at the concert comprises classic Finnish and Russian pieces. The concert’s soloist, Polish pianist Krzysztof Jablonski, also performs as a pro bono donation.

Proceeds from the concert will be directed in their entirety to the Foundation’s Clean Baltic Sea projects.

Music in the landscape of the Baltic Sea’s underwater meadows

To complement the music, the concert audience can enjoy the atmosphere of Jukka Nurminen’s underwater photography. Nurminen has donated the photographs to the John Nurminen Foundation for use at the Clean Baltic Sea concert.

Jukka Nurminen explains: ‘The photographs take you to a world where many boaters lower their anchors in the summertime, but which few of them have actually witnessed with their own eyes. We aim to provide an experience that is not only musical, but also, with the help of the photographs, acts as a reminder of why the concert is organised. The photographs express what the sea looks like at its best. The photographs have been taken late in summer/autumn and in the autumn, when visibility below the surface is sufficient for capturing the versatility of underwater landscapes.’

Yle will record the concert, and it will be broadcast on Radio Yle 1 on Wednesday, 6 March at 7:00 p.m., and on Yle Teema on Ascension Day, 9 May 2013. A direct video broadcast of the concert can also be viewed on Yle’s web pages on the date of the concert www.yle.fi/klassinen.

Opening hours of the exhibition Beneath the Waves of the Archipelago Sea:

For over two decades, Jukka Nurminen (born 1979), M. Sc. (Econ) and Finnish Special Forces mine clearance diver, has photographed tropical marine ecosystems and the underwater nature of the Baltic Sea. He has won the Finnish award for underwater photography twice. During close to 10 years and 200 days of shooting, Jukka Nurminen, his cameras and crew have spent roughly 1,000 hours beneath the surface of the Baltic Sea. The photographic exhibition Beneath the Waves of the Archipelago Sea, which showcases Nurminen’s work, has visited 19 art museums, galleries and exhibition spaces in Finland, Germany and Russia.