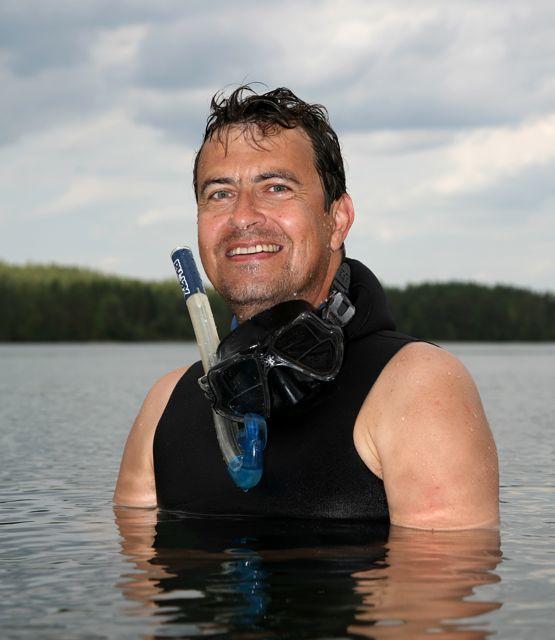 Nature, and the sea in particular, are very close to the Espoo-based nature photographer Pekka Tuuri’s heart, as they have offered him countless unforgettable experiences. Pekka’s hobbies have included photography ever since he was a schoolboy, diving for the past 25 years, and underwater photography for the past 20 years. For Pekka, who has always been interested in ecosystems and the mechanisms of nature, photography has opened up a new way to observe nature and take it in visually. Underwater photography has been particularly rewarding, as it is always an adventure to go below the surface of the sea.

One of Pekka’s most unforgettable Baltic Sea experiences took place in August 2010, when he spent 24 hours at the Söderskär lighthouse in the Sipoo archipelago. During this time, he was exposed to weather in all its variations: winds at 17 metres per second, dead calm, sunshine, and pouring rain. For Pekka, the vast, powerful and mysterious sea evokes a strongly visceral reaction.

The blue-green algae blooms, alongside other consequences of eutrophication that can be observed from the surface, have received considerable media coverage in magazines and on TV. As a diver, Pekka’s experience of eutrophication is more all-encompassing: the water is of a murky, green colour, visibility is poor, thread alga is abundant, and there are patches of dead, oxygen-depleted sea bed. Above surface, this would equal a landscape where you could barely see in front of you, slimy threads would hang from the trees, and the ground would be covered in mould.For those interested in the status of the Baltic Sea, Pekka’s message is that everyone can make a difference. It is important to appeal to decision-makers, who are key to initiating major change. At the same time, he believes that the actions of individuals are equally important. When a sufficient number of people join the effort, eutrophication can be reduced also through small measures.

Pekka was intent on donating a share of his Nature Photographer of the Year prize money to protecting the Baltic Sea. Choosing the exact target for the donation was also easy. Pekka was drawn to the Clean Baltic Sea projects, which combine concrete action, cost-efficiency and international co-operation. Pekka believes that cost-efficient, international projects should be at the core of environmental co-operation in the future.